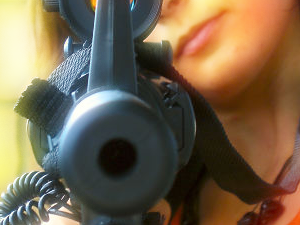 The Scourge of Mass Shootings

Mass Shootings seem to be happening with greater and greater frequency.  Maybe it’s the fact that news spreads at light speed all over the planet that makes it seem like there are more of these things happening?  No, they are increasing in both scope and level of violence.

First there is a trickle of news about an “active shooter.”  Then the horror seeps out.  The images, the people looking for loved ones, the tears and heartbreak…

Next come the reporters with their earpieces and appeal for organization and help.  Then the profile of the shooter as we frantically try to make sense of another one of these things.

Then, and this is the most damaging aspect, the pundits start in.  This is happening faster and faster lately.  Everyone has their opinion about these things and who is to blame.  The gun nuts in the NRA begin lobbying, and gun sales go way up.  The loonies on the other end cry to ban and confiscate anything that can shoot a bullet.  The Facebook and Twitter soapbox explodes with opinions and hurtful blame… and NOTHING comes of it.

Then the news dies down, the nation forgets as another financial crisis sets in, and we’re back to binge watching Netflix.

Until it happens again.

What is Really Behind Mass Shootings?

You can blame guns, access to silly assault rifles, radical ideology, the NRA, the “DemocRATs”, the “RepubliCANT’s”, or whomever you want (all valid, but missing the core point), but the truth is far more sinister and resides in every single one of us.  That’s right, EVERY SINGLE One of US.

It’s anger.  Uncontrolled fear and anger.  Watch “Bowling for Columbine” by Michael Moore and you’ll get a pretty good idea of what is really behind mass shootings, half of it anyway.  He produced that over a decade ago and gave us a whole lot of brain food, and like everything else, we’ve done NOTHING with it.  We’ve just gone back to bickering and hiding from the truth, because the truth scares the crap out of us, and we are too weak as a society to really address it, or too ignorant to see it, or both, I don’t know.

There’s a great article on Slate that gives us a HUGE hint:

All humans are born with a powerful wired-in fight-or-flight response—anyone who has held a screaming infant can attest to its intensity. Anger is an essential biological reaction to perceived danger, a physiological shift that allows us to stop thinking and take immediate action, to act as if our life depends on it. It is generated by our evolutionary survival response to threat, and we all carry it. We are wired by nature for rage. It is the impulse that has insured our survival as a species: kill or be killed. It is primitive, and it is very strong…

I’d written about fight, flight, or freeze many times on this site.  This is our innate response to danger, and has done a great job of keeping us alive.  It’s also behind very irrational behavior.  It worked very well for a time when we were dodging hungry lions and bears, but it’s more hurtful when triggered by things like a boss yelling at you, or someone not using a turn signal in traffic.

Fight or flight is really dangerous when it goes haywire and keeps your adrenaline pumping when there is no physical threat.  It gets downright scary when it’s triggered by relatively harmless things that you “perceive” to be a physical threat, but in reality is nothing more than something that can be negotiated with some preparation.  It’s an emotional intelligence thing, and something that many of us are still on a kindergarten level with.

The article goes on to say:

An adult who is able to effectively regulate anger uses it to alert himself to a problem situation. Managed well, it is an extraordinarily effective warning system.  Unregulated, impulses are stronger, and thinking is less clear. The poorly regulated adult with enhanced reactivity, impulsivity, and a constant state of fight or flight sees in every interaction the potential for being harmed and the necessity to defend himself. The angrier he feels, the less clearly he will think. His reactions will often be out of proportion to the situation, and he will be prone to violence. Because he sees the world as a constant source of danger, he externalizes blame, to his spouse, children, neighbors, government, and “others” in race, nationality, religion, or culture. Angry, blaming, aggressive, and unable to modulate his emotions, he can become a danger to others.

Read that AGAIN, and AGAIN, and AGAIN.  It’s is the base cause behind MOST violence in the world.  It is certainly behind MANY mass shootings.  The POORLY REGULATED ADULT with ENHANCED REACTIVITY, IMPULSIVITY, and a CONSTANT state of FIGHT or FLIGHT, sees in EVERY INTERACTION the POTENTIAL for being harmed and the NECESSITY to DEFEND HIMSELF… He will be PRONE to VIOLENCE.

Look at the background of most of these mass shooters.  They mostly had some warning signs that you could attribute to this.  I’m not going into those with schizophrenia, which is a whole other issue.  I’m focusing on the ones where there shooter was mostly sane, but with severe anger issues.  The media doesn’t really like to focus on this because it points to the possibility that anyone can fall prey to this behavior.  There’s no one to blame, so therefore, no story beyond carnage and aftermath.  No “man bites dog.”

The Slate article nails it when they say:

All that sets the rest of us apart from a murderer is the ability to regulate our angry impulses.

That is it.  That is the real story.  It’s not sexy, and it’s really very scary.

Most of us don’t want to accept that, but it’s the truth.  We need to be strong and accept that.  From there, we can really work as a society to mitigate the risk of these things happening over and over again.

How to Really Reduce Mass Violence

I really recommend reading the article on Slate, which is extremely well written and explains way more than I’m getting into here. Click on it and it will open in a new window.  When you’re done, come back here and use the information on this site to learn mindfulness.  It has been proven time and again to give you the tools you need in your own life to mitigate your own fight or flight response.

That is how you change the world.  Not with judgement or policy, or standing on your Facebook dais, but changing yourself first, then, through compassion, education, and example, the world.