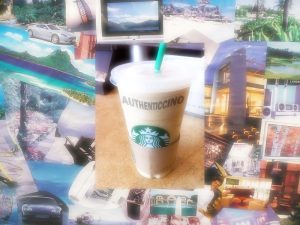 If there’s one thing I’ve learned since starting this blog, it’s that I have to walk the line with my perceptions and that of a “new age dogma”.  While I choose to refuse to follow any “dogma”, as in those espoused by most organized religion just to follow, I also refuse to fall in line with the “new age dogma” that I see scattered through different institutions.

I’m seeing this new “spirituality” movement gaining as much dogma, although not directed by any organized church, as being just as annoying as the dogma taught by organized religion.

The dogma I speak of is authenticity.  It’s the “be yourself, love yourself first, and make a vision board of it” mentality that I see pervading the new spiritual movement.  It’s the taking of certain Eastern thought and blending it with Western “ethos” to become an easily digestible coffee break drink.  Let’s call it the Authenticcino.

There’s a recent New York Times Op-Ed piece called “The Gospel According to “Me” where the authors state:

Despite the frequent claim that we are living in a secular age defined by the death of God, many citizens in rich Western democracies have merely switched one notion of God for another — abandoning their singular, omnipotent (Christian or Judaic or whatever) deity reigning over all humankind and replacing it with a weak but all-pervasive idea of spirituality tied to a personal ethic of authenticity and a liturgy of inwardness. The latter does not make the exorbitant moral demands of traditional religions, which impose bad conscience, guilt, sin, sexual inhibition and the rest.

While I like the fact that the dogma surrounding behavior is not as blunt in this new agey hype as it is in Sunday School, that doesn’t mean that it’s not there!

Seven Deadly Sins Are Not Gone

The seven deadly sins are alive and well in the contemplative path.  Make NO mistake about it.  They are just thought about a bit differently, that’s all.

If one believes that they can start meditating and become “spiritual”, while still participating in the seven deadly sins, they’d be correct.  They can.  There are no laws saying that you’ll go to hell, or be ex-communicated from some church. However, try to keep up that behavior while meditating and you’ll quickly realize the hardship you are creating for yourself.

Barring any sociopathic tendencies, overindulgence in anything will get in the way of meditation and mindfulness.  The Four Noble Truths describe suffering that is brought about primarily through attachment and aversion.  The seven deadly sins are ALL about attachments and aversions.  Look at them deeply, and it becomes evident.  Greed, Sloth, Envy, Wrath, Lust, Pride, and Gluttony will KILL your practice.  They DIRECTLY cause suffering.

The Eightfold Path is all about living to eliminate these from your life so that you can practice in a clean manner and reach your goals.  The shame here is that I see many sects of those practicing “The Secret” and the Law of Attraction thinking that they can put up a vision board, stay completely positive to the point of neuroses, and reap the rewards and benefits.

If anything, it seems like this New Agey movement, while lacking any cohesive core, is spreading a bit of hidden discontent.  I see it on the news and spoken by pundits.  It’s a bastardization of truth that seeks to alienate those who fall through the cracks.

If Your Poor, it’s your OWN fault.

I love this one.  Somehow, if you’re poor, you fail to think positively, or you lack the moral compass to make the right decisions, or simply you’re just a “taker”, not a “maker” and need a radical shift in perspective.

Yeah, I’ve read the Napoleon Hill books too.  They are great, but we need to be careful about using this new “spirituality” to alienate those who are less fortunate, and somehow blame them for their lot.  The truth is far deeper than just positive thinking and vision boards.

We ALL live in glass houses.

Truth be told, the spiritual paths are difficult work, and don’t promise any specific end.  It’s mostly about the journey, and a deeply personal one, intrinsic to each life out there.  Dogma be damned.

Follow your bliss, but don’t get attached to it.  Put down the labels, vision boards, and trinkets and pay attention to your own attachments and aversions, lest we all fall into a chaotic form of the very institutions that pushed us away in the first place.