Methylenedioxymethamphetamine, and PTSD (Post-traumatic stress disorder) may have a link. In other words, with the help of a psychotherapist, and under the right conditions, MDMA might be very effective in treating someone with PTSD. The way that this happens, though, is very interesting.


Here’s what it is and what it does to your brain, before we go any further. 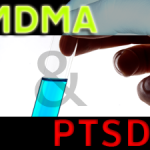 MDMA is a drug that increases empathy in individuals who take it. It’s used in clubs worldwide and goes by many names including E, X, Molly, etc… It’s huge at raves and other types of parties, but is in fact illegal in many countries. While it can make the users feel euphoric, it can come with some bad physiological consequences.

Still though, the research on the use of MDMA to treat PTSD is very, very interesting when we look at how it’s used.

According to an article on Vice titled, “Can MDMA Cure PTSD?”, the link between MDMA and PTSD is spelled out and very relevant to this site as you’ll soon see.

“Studies have shown that an occasional dose of Methylenedioxymethamphetamine (MDMA, stupid) in tandem with

psychotherapy can dramatically improve the mental health and wellness of patients suffering from Post Traumatic Stress Disorder. A paper published last year by Michael and Ann Mithoefer (a psychiatrist and nurse respectively, who are also married) in the Journal of Psychopharmacology has produced some eye-opening results…

…When working with patients suffering from PTSD, he defines three crucial connections that must be made: First, the patient must be made to feel safe within the present moment. Second, in that moment, patients need to feel comfortable enough to acknowledge painful memories and to freely grieve. And third is that, through these first two steps, patients reconnect with the world, establishing an empathy and trust with the therapist they are communicating with.

He says that MDMA addresses the progress of all three stages of therapy in parallel with the drugs own three perceptible influences: “MDMA, has three major effects if it is taken in the right setting. One is to open your heart. Another one is to make yourself present, so that the future and past don’t matter, you really arrive into the here and now. And the third one is, for some people, for the very first time you feel no shame. So you’re shameless.”…”  [LINK]

So apparently, under guidance, the sufferer must be brought into the present moment. They must be comfy and able to meet their pain eye to eye, and then under MDMA will feel empathy and trust. The drug opens your heart and makes you focus and feel the present moment. I wonder what else can do that?

Practicing mindfulness can certainly have the same effects, but can be much slower. Also, under the guidance of a licensed psychotherapist, can possibly be very effective for something like PTSD. This study is very interesting and I will be following this closely.

I hope that, if effective, we can use this to treat a world that is increasingly exposed to things that cause PTSD. From victims of violence on our streets to returing war heroes, this study gives us some real hope. Let’s see where it goes.